The installation of a unique green roof at the Muslim Cultural Heritage Centre last year is now bearing fruit in an area surrounded by one of London’s busiest road and rail networks.

Following a routine maintenance visit this summer by The Urban Greening Company (TUGC), who installed the roof last year, they felt compelled to share the results.

When TUGC took the project on the challenge was to convert an inert stone ballast roof in the Borough of Kensington and Chelsea into a wildlife area to provide much needed green space on a roof sandwiched between the busy A40 flyover and the Great Western Mainline rail route to Paddington.

The next challenge was how to get the 110 sq.m of green roof onto the top of a four storey building quickly, economically and without disrupting the day-to-day activities of a busy community centre. Combined with this, a lightweight solution was critical to ensure there were no weight issues.

The Royal Borough of Kensington and Chelsea and Groundwork London, commissioned Dusty Gedge of Green Infrastructure Consultancy ltd to design a scheme. 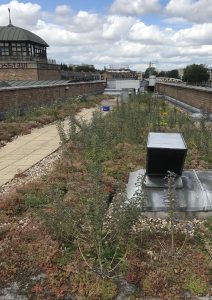 after we had finished greening the roof 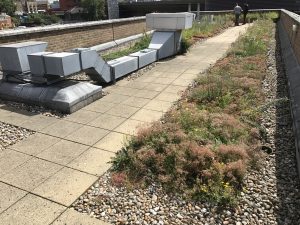 The clear solution was a portable green roof – Aquaten LiteTM. The cushion like structure containing a mix of seed, substrate, recycled natural fibres and Aquaten’s unique water absorbent fabric weighs 9kg, which enabled a team to install the roof in less than a day without disturbing the natural order at the centre. The Aquaten LiteTM  locks in rainfall and moisture to create positive growing conditions for the vegetation to develop.

As Mike Cottage of TUGC pointed out, “We’ve converted an ugly river stone area into a natural habitat and when we revisited the roof this summer the transformation was spectacular; the variety of species and plant growth were phenomenal as the simple video will show.”

Furthermore, the roof saw the first use of a fabric which absorbs and neutralises pollutants from the atmosphere – Aquaten CleanAirTM – a much needed boost in a congested area.

Bulent Kazim, project manager for The Royal Borough of Kensington and Chelsea said: “We are trying to create wildlife habitats across the borough as well as sustainable urban drainage to combat the effects of urbanisation and the living roof at the Centre qualifies on both of those counts.”

Abdurahaman Sayed CEO at the Centre commented “We had been looking at ways to create a more user friendly habitat on the roof of the centre and the Aquaten solution can now be seen to be reaping rewards.”

More greening in the city.

One of Londons biggest Living Walls
We use cookies on our website to give you the most relevant experience by remembering your preferences and repeat visits. By clicking “Accept All”, you consent to the use of ALL the cookies. However, you may visit "Cookie Settings" to provide a controlled consent.
Cookie SettingsAccept All
Manage consent

This website uses cookies to improve your experience while you navigate through the website. Out of these, the cookies that are categorized as necessary are stored on your browser as they are essential for the working of basic functionalities of the website. We also use third-party cookies that help us analyze and understand how you use this website. These cookies will be stored in your browser only with your consent. You also have the option to opt-out of these cookies. But opting out of some of these cookies may affect your browsing experience.
Necessary Always Enabled
Necessary cookies are absolutely essential for the website to function properly. These cookies ensure basic functionalities and security features of the website, anonymously.
Functional
Functional cookies help to perform certain functionalities like sharing the content of the website on social media platforms, collect feedbacks, and other third-party features.
Performance
Performance cookies are used to understand and analyze the key performance indexes of the website which helps in delivering a better user experience for the visitors.
Analytics
Analytical cookies are used to understand how visitors interact with the website. These cookies help provide information on metrics the number of visitors, bounce rate, traffic source, etc.
Advertisement
Advertisement cookies are used to provide visitors with relevant ads and marketing campaigns. These cookies track visitors across websites and collect information to provide customized ads.
Others
Other uncategorized cookies are those that are being analyzed and have not been classified into a category as yet.
SAVE & ACCEPT
Scroll to top